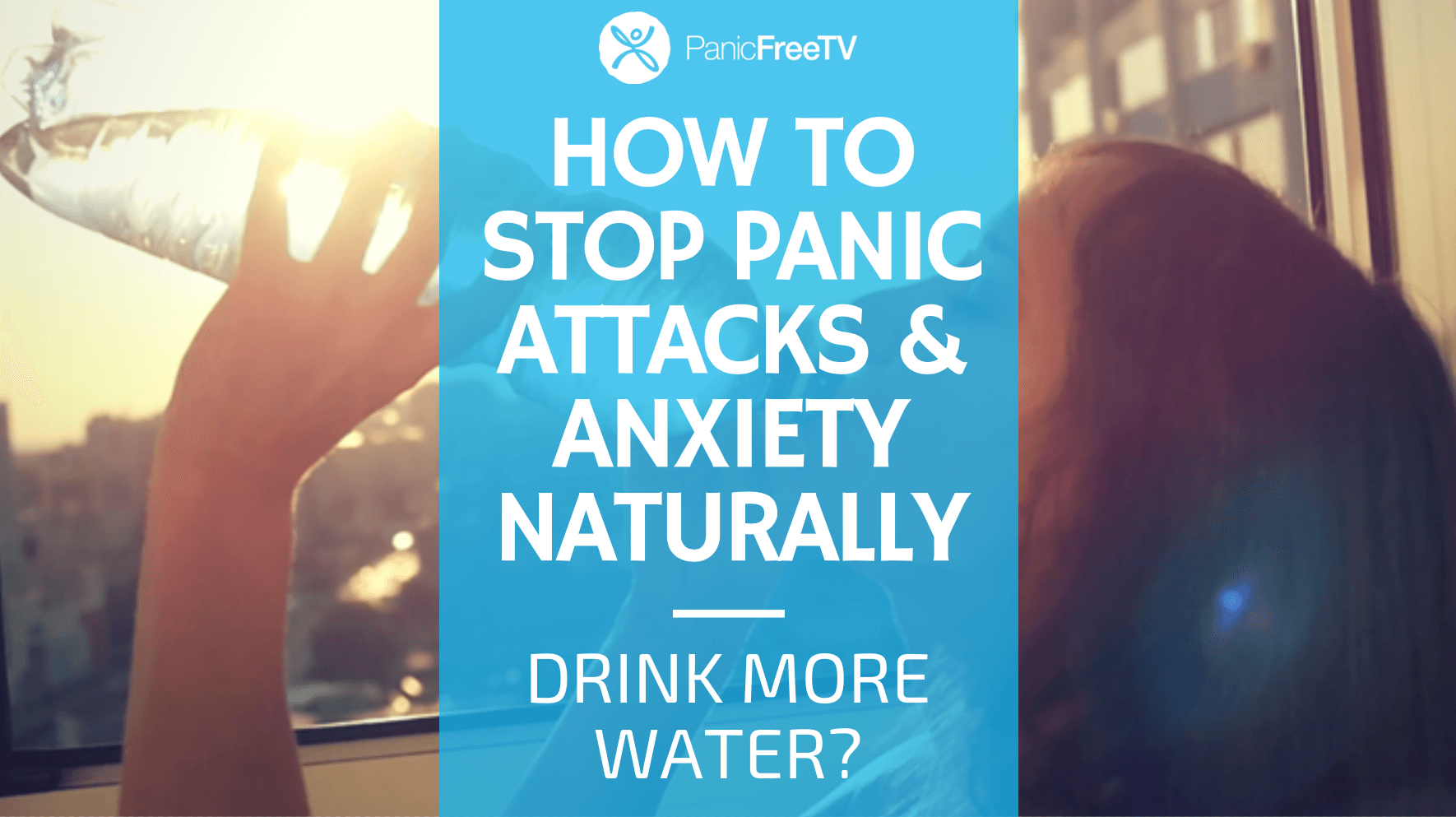 Is it possible to stop panic attacks and anxiety naturally, by drinking more water as is often claimed online? Discover what the scientific evidence has to say in this episode of “Panic Free TV” Fact or Fiction...

Hi, I’m Michael Norman and welcome to Panic Free TV’s Fact or Fiction. This is where as a scientist and anxiety specialist, I help you cut through the noise, myths, and popular claims… and show you the simple science of what really works to stop your panic attacks fast, for good.

So Mary has several questions here...

One is about how to naturally stop anxiety and panic attacks.

The others relates to drinking more water specifically, to try and achieve that same result.

Let’s talk about the water first, because it leads into one of the most important counter-intuitive findings from the last 3 decades of research into panic attacks.

This counter-intuitive twist is essential for you to know about if you want to finally enjoy a normal, panic-free life again.

Before I get to this twist though, let’s answer some of Mary’s questions.

First, is dehydration really a common cause of anxiety?

It’s a surprisingly common claim online — but is there any evidence to back it up?

Other than for life-threatening levels of dehydration — levels that you and I are unlikely to EVER face — the answer is no.

There’s no scientific evidence that dehydration is a common cause of anxiety.

For example, a 2013 French study showed that women who were not allowed to drink ANY fluids for 24 hours were less alert, more sleepy, more fatigued and confused… but they weren’t any more anxious than normal.

The same thing has been found for men.

In a 2006 study, there were no changes in levels of depression, anxiety, or self-confidence… even when men were not allowed to drink for 24 hours.

So the claim that dehydration is a common cause of anxiety is definitely not true, even when people are not allowed to drink for 24 hours.

Second, is drinking more water one of the fastest ways to significantly reduce or treat anxiety?

Well there’s absolutely no scientific evidence for that claim either, and it’s a pretty big claim.

Now obviously, ANYTHING that supports optimal health is important for EVERYONE whether they’re anxious or not — so you should drink the right amount of water for you — but water is definitely not a magic bullet for anxiety.

Three, can dehydration cause panic attacks?

In some people, yes, but not directly.

And dehydration is definitely NOT the cause of ongoing problems with panic attacks.

As I cover in my free “﻿﻿Panic Free TV” Foundation Serie﻿s, panic attacks are triggered by a learnt fear of certain body sensations.

While different people are triggered by different body sensations, if you’re scared of feeling lightheaded or dizzy in particular, then since moderate levels of dehydration can create these sensations… if you become dehydrated enough, it might trigger a panic attack.

But here’s the thing — it’s NOT really about the dehydration.

ANYTHING that creates sensations of being lightheaded or dizzy could trigger a person who’s scared of those sensations… even if it’s something as harmless as spinning around in the garden.

So what’s the counterintuitive twist I mentioned earlier?

Well it’s one of the most surprising and important findings of the last 3 decades of scientific research into panic attacks.

Since I’ve already covered it in depth in my free “Panic Free TV” Foundation series, I’m just going to mention it here very, very briefly. (If you want the full explanation, and if you want to discover why this is so important for you to know about in order to finally be panic-free, then please watch my Foundation Series).

So very, very briefly, a huge amount of research has shown that it’s the very well-intended strategies, habits, and actions... that people innocently use to try and SOLVE their problems with panic… that more often than not tend to backfire… and make problems with panic worse, in the long term.

Here are just three of many examples:

Unfortunately what each of these “attempted solutions” have in common (and this is deeply counter intuitive) is that these strategies tend to make problems with panic attacks WORSE, not better, in the long-term.

Now, in the very same way, some people fear that a panic attack could constrict their throat… and so they drink water during a panic attack to try and reassure themselves that they can still swallow.

While this might bring some temporary feelings of relief, unfortunately in the long-term… again, the research shows that it tends to make problems with panic attacks worse. Not better.

Now, I’m covering this all incredibly quickly, so if it’s confusing to you, or if it doesn’t make any sense yet, that’s totally fine.

Everything will quickly make complete sense when you watch my Foundation Series and go through the other materials I provide.

The reason I’m mentioning all this now, though, is because drinking water during a panic attack in order to try and stay safe or stop the panic attack… can backfire and lead to more panic attacks, in the long-term.

So to sum up the three home messages from this episode:

Okay, so if we leave all we’ve talked about aside for a minute, what’s the single best approach for naturally stopping anxiety and panic attacks fast?

Well, this is exactly what I cover this in detail in my free “Panic Free TV” foundation series.

It’s simple science-based help for panic attacks that will show you the fastest, natural way to go from wherever you are right now… back to a life that’s as normal, care-free, and panic-free, as anyone else you know.

The solutions for panic are very simple, but they’re deeply counterintuitive — and that’s why I created this foundation series.

Again, it’s completely free, it will make an immediate, important difference in your life — and to watch it right now, simply click ﻿here﻿ and get started today on your journey back to a normal, panic-free life.

Thank you so much for watching.