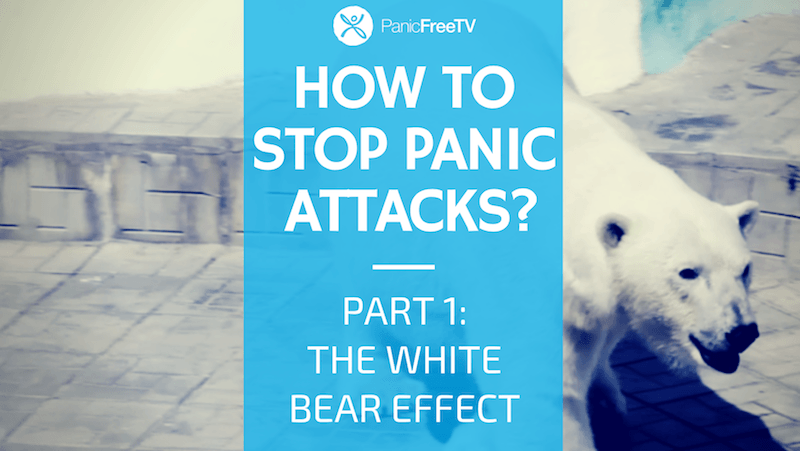 In part 1 of this series I share the #1 big-picture insight you need to know about, based on the last 3+ decades of scientific research into panic attacks.

I also explain one of the biggest, specific mistakes (that almost EVERYONE makes) that fuels a panic attack, makes it a lot worse, and can lead to future panic attacks...

In this video I’m going to share with you the single most important insight you need to permanently stop your panic attacks fast.

This insight comes from over 3 decades of scientific research into panic attacks… and knowing about it is KEY for you finally having a 100% normal, panic-free life.

Hi, I’m Michael Norman, and as scientist and anxiety specialist with clients from over 103 countries around the world… I’ve witnessed first hand how panic attacks can rob even the strongest, bravest people of their basic right to feel safe in life.

Panic shakes people to the CORE.

It’s one of the most terrifying experiences in the world.

It can make us feel isolated and alone.

It can be exhausting and depressing.

And it can create a fear that we’ll never be normal again.

Unfortunately, on top of all of this… as I’ve witnessed in all my years teaching doctors and medical students… even in professional circles, panic and anxiety issues are more often than not, deeply misunderstood.

That’s why this video is so important — because thanks to a lot of research, the truth is, we ALREADY know what works best to quickly end panic attacks… and what doesn’t.

Panic is one of the most treatable issues there is… IF you get the right, scientifically grounded help, and that’s what this video is all about.

In this video I’m going to share with you a clip from my free “Panic Free TV” foundation series.

This foundation video series compressively covers a wide-range of topics relating to panic attacks that are essential for you to know about… if you truly want to enjoy a life that’s as normal, care-free, and panic-free as anyone else you know.

If you want to watch my foundation series in full, right now (and if you want to get all my Panic-Free Fact sheets as well) you can get immediate access here. It’s all completely free, and I think you’ll agree, after you’ve started watching it… that it makes an important difference in your life.

So whats the single most important insight you need to have to permanently stop your panic attacks fast?

To answer this question, here’s a short video clip from my free foundation series.

It’s just a few minutes long, and after you’ve watched finished watching it… I’ll come back and quickly add even more clarity and insight — because it’s incredibly important that you grasp this fully.

... and what I’d like you to do to lay the foundations for the technique I’m going to be teaching you later in this episode... is something very small, a little unusual, but very important.

You see, there is a research finding that’s one of the most important things you could EVER learn about panic. And because it is so important, I want you to understand this fully. MORE than just intellectually... because this is an important step to setting you free.

So what I’d like you to do, as you’re watching, right now is I want you to make sure, that you DON’T… think about a white bear.

Or a cute, little white bear…

In fact, don’t think about any white bear, at all.

How are you going so far?

So, to make this a much fairer, I’m gonna be quiet and I’m going to give you 10 seconds of thinking music. And if you want to also close your eyes, so that you can fully focus, you can go ahead and do that too. Your only task is to not think about any white bear at all… for 10 seconds.

Try as hard as you can, use all the willpower you have, and TRY, to not think about any white bear, at all… for the next 10 seconds.

Did you successfully stop any thoughts of white bears from entering your mind?

If you’re like the vast majority of us, trying NOT to think about a white bear, makes it much more likely that you will.

In other words, it’s a strategy, that guarantees failure.

And as you’re going to discover, as the research clearly shows... this phenomenon plays a central role in anxiety and panic.

Now, this White Bear experiment comes from the late Daniel Wegner, who was Professor of Psychology at Harvard University. In his study, he and his colleagues asked people to make sure they didn’t think of a white bear for 5 full minutes. That’s 30 times longer than the short 10 seconds we just tried.

What Wegner discovered was that, unsurprisingly, people couldn’t suppress thoughts of a white bear.

What WAS surprising though, was that even after the experiment was over, even when people could think whatever they wanted... they ended up thinking about white bears far more, than they would have normally.

In other words, the act of trying to SUPPRESS a thought actually made it stronger, more tenacious, more frequent, and more enduring, even after the experiment was over.

This phenomenon, which Wegner called “Thought Suppression”, has been shown over and over again, in the scientific literature.

For example, in another study, when golfers were told NOT to overshoot, that’s exactly what they were much more likely to do — to overshoot!

And in a different study with soccer players, when they were instructed to AVOID kicking a penalty shot in a certain direction... they couldn’t keep their eyes from looking at that forbidden spot.

Ironically, the very act of trying to suppress a thought, actually makes it much more likely, that we’ll get to have it.

So why does this happen?

Why does the White Bear Effect exist?

It exists because, in order for us to make sure that we’re NOT thinking about something, some part of our brain has to think about it, which ironically keeps the thought alive.

This is especially true when we’re under, what’s called, “mental” or “cognitive load”.

It can come from having a lot on your mind, or from engaging in a difficult mental task.

It can come from being distracted.

And most relevant here, it can come from stress and anxiety.

When we’re stressed or anxious, trying to suppress a thought is even harder than normal — and so by trying to NOT think something, makes it even more likely we will.

So, how does this directly relate to panic?

Well, if we think about it, what’s one of the most common and natural things that people do, if they have a panicky thought?

More often than not, they try to fight it!

This is an incredibly natural, intuitive thing to do.

Remember: as we covered in the episode #2, a panic “false alarm” triggers the FIGHT-flight response.

Panic creates a natural urge to either try to ESCAPE the situation we’re in, or it creates an urge to FIGHT the panic itself.

And what are the different ways we try to fight panicky thoughts?

Well, we can try to ignore them, forget them, debate them, eliminate them, distract ourselves from them... or in other words, we try to suppress them.

Any sensible person would do it.

And unfortunately, more often than not, it backfires.

Because of the White Bear Effect, trying to suppress panicky thoughts makes those thoughts stronger, more resilient, and more enduring.

And because of this, it fuels The Panic Pattern.

Last episode we talked about The Panic Pattern: the hidden, core pattern behind every panic false alarm. A panic attack happens when…

The most important insight to grasp about panic attacks...

So, as you’ve just seen for yourself in this short clip from my free “Panic Free TV” foundation series… panic and anxiety don't follow the normal rules that most people think they do.

“The White Bear Effect” is just ONE of several examples of this.

Most people try to stop a panic attack by trying to fight it… which, unfortunately, makes that panic attack stronger, last longer… and can reinforce and worsen problems with panic attacks in the future.

What seems as if it SHOULD work DOESN’T.

And what DOES work flies in the face of commonsense.

And when it comes to stopping panic attacks permanently, fast… when it comes to you finally having a life that’s as normal, care-free and panic-free as anyone else you know… the answers are actually more simple than you’d think… but they’re deeply counterintuitive.

That’s the only reason why you still have panic in your life.

In this series I help take away the mystery and confusion surrounding what you’ve been going through.

I show you how to immediately “turn off” “The White Bear Effect”… and I give you the foundations you need, to start you on your journey back to a normal, panic free life.

Again… my foundation series is totally free, and you can watch the first episode in full, right now… just by clicking on the link on the screen or in the description below.

I hope this video has been valuable to you.

I’m Michael Norman, and thanks so much for watching.